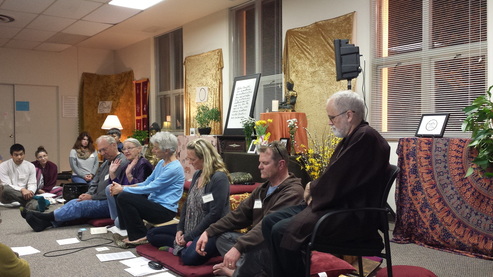 Each spring, the Honey Locust Sangha hosts a weekend-long residential retreat.  The retreat is led by one of our wonderful dharma teachers in the lineage of Thich Nhat Hanh.  Beginning on Thursday evening and ending Sunday afternoon, the retreat offers an enriching time of communal practice.

More information and a registration link will be provided at a later date.

Save the Date: May 14 - 17, 2020
Spring Retreat with Brother Michael Ciborski at the Creighton University Retreat Center in Griswold, Iowa.​
To learn more about Brother Ciborski, and to access recordings of his dharma talks at a variety of retreats, visit www.truemiddleway.org

Michael is a lineage holding Dharma teacher in the Buddhist tradition of Venerable Thich Nhat Hanh.  He lived as a monk for seven years in Plum Village, France, and has worked intimately with Thich Nhat Hanh and the monastic community to organize, support and offer meditation retreats around the world. A skilled musician, he informally studied voice training and chanting of several European and Asian traditions and served for several years as an English language chant master in the monastery. Michael also studies and practices in the tradition of Anthroposophy, begun by Rudolf Steiner.  He finds great joy weaving together these two wonderful paths guided by two marvelous and awakened human beings.
​
After leaving the monastery in 2003, Michael returned to the US and along with his wife Fern Dorresteyn, has helped to establish an intentional spiritual community and mindfulness center in Southern New Hampshire known as MorningSun.  In addition to supporting the life and practice of MorningSun, Michael’s practice offerings are many: